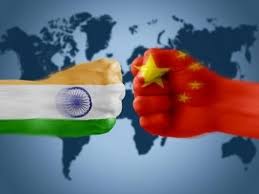 PM Modi is out on his balancing trip visiting Palestine after his recent visit to Israel. He tries to deftly balance between the two warring nations and has taken a decisive shift from India’s earlier pro-Palestine stand, despite India having a discreet alliance with Israel all along. Their crucial support in the containment of Pakistan during Kargil war is still whispered in our defence corridors. India is no doubt more visible than ever in the world as a growing power in South Asia, and a balancer of China’s hegemonies.

Be that as it may, India’s standing in its own neighbourhood should not get out of focus in the wrapping in glory of visits and hugs of the PM around the world. The External Affairs ministry has been all but usurped by the PM, the EA Minister limiting her activities largely to freeing stranded Indians from across the world and issuing health visas on priority as a PR exercise to Pak citizens.

Pakistan has always been our adversary, has been a Chinese supporter, regardless of issues and has even created an audacious violation by bequeathing land for the Chinese Highway in Pak occupied Kashmir. Pakistan continues to hurt us from provocations in every way, on our borders, and in the international arena.

Bangladesh, though under Sk. Hasina’s regime is not as pronounced anti-Indian, the country and its people have all along considered India a Hindu rashtra and inimical to their country’s Islamic beliefs. Their opposition leader Begum Khaleda may have been sentenced to jail now, but could spring back soon in the nation where corruption is decorous and prolific, and lead to reversal of the bonhomie between our countries.

Nepal has long moved away from India to lean heavily on China and India has let them adrift in our costly mistake of disinterest and lawed diplomacy. The latest Chinese overtures to provide Internet connectivity to Nepal should be a cause of alarm for India. Sri Lanka too has learnt the deft art of playing India against China and succeeding in obtaining concessions both militarily and economically. The country went ahead submitting its sovereignty while allowing Chinese crucial port facilities for its military ships. Bhutan too, is not averse to discuss Doklam with China and even desires be a part of the Chinese road initiative to derive the economic benefits.

Myanmar, steeped in communistic government for decades, has always been close to China and their military junta has close cooperation to China. They too have awarded deep sea facilities in Kyaukpyu, in the Western Rakhine state. The Chinese reportedly have a secret submarine station too in Myanmar.

The great Indian irrelevance in our neighbourhood has come into prominence with Maldives recently snubbing India, after India disallowing their envoy to visit and explain the recent crisis. Maldives retorted and sent their envoys to Pakistan, China and instead.  The archipelago nation, earlier ruthlessly cancelled an award on GMR airport and switched over to China, causing erosion of trust and faith between the two nations,

We are effectively encircled and the cost of taking on China, militarily or economically, may be impractical and not in the best interest of our country irrespective of the chest beating and rhetoric. The alliance of India between US, Australia, Japan and Israel to contain China’s influence should not limit to the challenge the latter’s dominance in the South China Seas, but should decisively thwart Chinese strategic string of pearls around India.