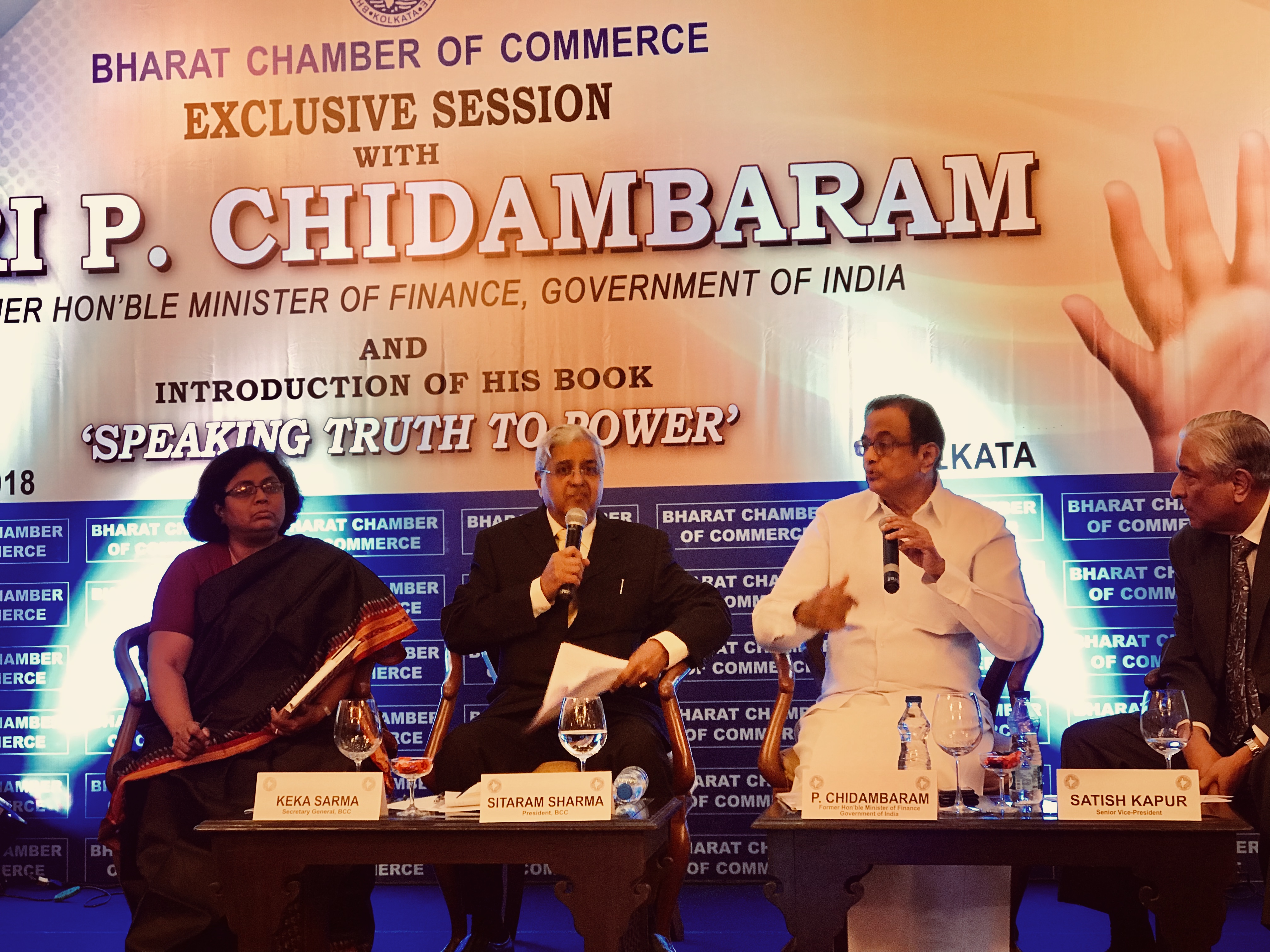 Chidambaram, the former Union Minister of Finance and earlier, the Union Minister for Home Affairs, graced the Bharat Chamber of Commerce at a city hotel to launch his book, ‘Speaking Truth to Power,’ published by Rupa & Co.

Business chambers usually avoid inviting leaders from the opposition for inviting the wrath of the government, though inviting Congress leaders face no problem in West Bengal, which fights BJP tooth and nail. The invitation left me wondering if the business chambers, usually cautious and deftly balancing between powers, now brave to unshackle themselves to invite the opposition leaders, indicating the waning influence of the present leadership in Delhi and the political events that may unfold in 2019.

Be that as it may, P. Chidambaram’s visit to the chamber is not a new one as he has visited a few times earlier. The Chamber’s President Shri Sitaram Sharma exhorted the former minister to react on falling exports, woes of the farmers, the adverse impact of the demonetization and of course the bank frauds among scores of other issues.

What was striking about the response of the PC, which stretched a little over one hour was, it was devoid of any rhetoric, but laced with sarcasm and veiled humour. He began with his reply that, if he were in the present FM’s shoes with the present state of economy the first thing he would have done would have been to tender his resignation.

‘No money has been allocated for budgetary proposals like the boisterous Insurance scheme covering 6 lakh families or 30 lakh persons with 5 lakh coverage each, or the MSP of an additional 50% to benefit the farmers, which could run into lakhs of crores, with the present FM merely stating that money will be found,’ PC lamented. On the job front too, he highlighted the vast difference between the promised 2 crore jobs per year to just less than two lacs as at present. The destruction of the small traders, tiny sector and MSME due to demonetization was inexcusable, he lamented.

The Rs. 17.7 lakh crores of cash that was in circulation before the demonetization is back now as per the RBI’s report he stated. He widely quoted the India’s Chief Economic Advisor over the lack of implementation of fiscal policies, the increasing borrowings for revenue expenditure and simultaneous reduction in allotments on capital account. He went on to state that the present government has not been able to do the fiscal consolidation, which he succeeded in lowering to less than 1.4% in 2 years during his tenure as the FM.

On the critical issue over his comment that ‘alternative methods must be investigated to resolve the vexed J & K issue,’ he stood ground stating that the lawlessness have increased now as compared to before.

In all, his was a balanced speech, though devoted to a lot of numbers in the best part of his speech in the beginning, but that is what a FM’s job is all about. Forgetting party affiliations and his woes relating to his son for a moment, he certainly was a knowledgeable finance minister by all accounts.