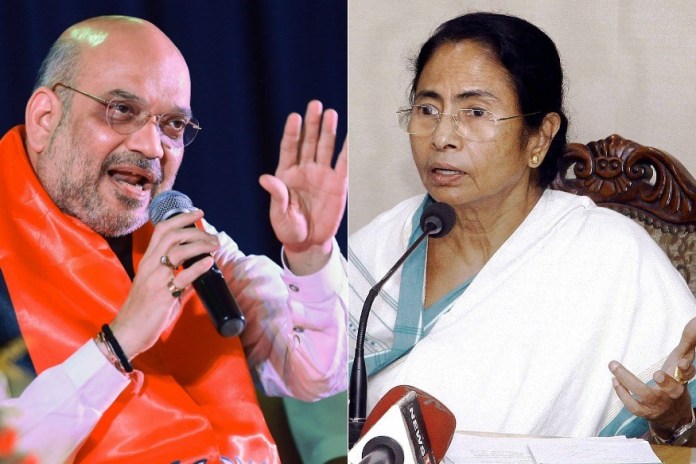 The last round had to be decisive, by valour or by deception. The opposing parties have just four days left to conclude their campaign, now centred around Kolkata City. Meetings have become more vitriolic and abusive than ever.

The President of BJP, Amit Shah, had addressed a meeting at Canning and was to arrive in his chopper to Baruipur, the permission to land not granted by the state administration for whatever reason. Shah thundered, “you can deny permission for the chopper to land, but you cannot stop BJP from winning Bengal over.” His remark ‘Kangal Bangal,’ bankrupt Bengal was not taken kindly by CM Mamata who retorted equally harsh.

Shah’s road show was on from Dharmatalla to Manicktala this evening. BJP meetings in South Bengal seldom sees a crowd swell, and there is no reason to believe the crowd was all local people. People had arrived from the districts, where the elections had ended, and also BJP cadres from UP and Bihar had arrived in strength to show their intimidating power around.

It was wrong on the part of the police to have accorded permission for a road show, through sensitive university area and narrow streets, thronging with students. The melee, in front of Vidyasagar college, was scripted. It is though difficult to state, who could be the culprit. The truck carrying Amit Shah was the target of the brick shower, and the cadre surrounding the vehicle in guard, probably in the apprehension of such an attack retaliated, resulting in a free for all, with a few injuries from either side.

Both leaders, Mamata and Amit Shah blamed each other’s party for the wanton violence, resulting in extensive damage to Vidyasagar College and a few vehicles. The sad part was that Iswar Chandra Vidyasagar’s marble bust was broken down. Whoever was part of the crime apparently did not know the greatness of Vidyasagar, who was rated by the BBC as the ‘9th Greatest Bengali of all time’. He was a Bengali Polymath, a key figure of Bengali renaissance and had forced the British to enact the Widows’ remarriage Act.

Bengal has changed. It does not matter whether it is TMC or BJP, past laurels are dumped, and past heroes are forgotten. Sycophants are happy to equate current leaders and corrupt leaders with Bengali greats like Raja Ram Mohan Roy, Netaji, Tagore and the like. The breaking of the statue is merely symbolic of the breaking away the past from the present.

Elections are won and lost, but the future could be dark if traditions are forgotten, regardless of who rules Bengal. Never before has there been they and we, to distinguish the veracity of crimes being committed in the name of politics by one and all. Educated citizens too, try to qualify each act of misdemeanour with an eye-for-an-eye explanation.

It’s a dark day indeed, and my heart quietly weeps at the decadence and the unstoppable consequences. If no else is ashamed, I am!