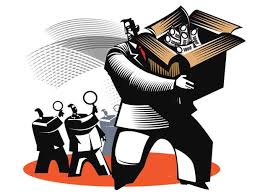 “Sir, here’s your fees. Thank you for granting me the approvals. I hope this will be our long and enduring relationship,’ the shady industrialist has successfully ‘managed’ land, environmental and other clearances from the minister and the bureaucrat for a hefty fee.  He cannot though still start off without funds.

“No problem,” the hand that always helped for a fee comes to the rescue, as the high official of a nationalised bank is summoned straight away and ordered to help a dear friend. Here again the minister and/or bureaucrat gets a cut as also the banker. Thus, commences a long journey of an unholy alliance to the detriment of the nation at the expense of the taxpayers.

“You have not paid the interests and the account does not seem to be healthy,” the low-level bank official meekly states.  Phone calls from the bank’s higher ups follow as do sumptuous lunches and even unauthorised trips abroad for the bank officials. Further funds are released by the bank to energise the account.

The perennially sick account remains sick and is now a distressed account. The bank calls the customer for a one-time settlement, waiving off all interests and even discounting the loan. The wily client has by now illegally transferred much of the money from his business abroad, the skeleton of the business barely visible. Some money goes to the lawyers and the auditors who help the borrower out with numbers. The account in an ordinary process becomes a Non-Performing Asset or NPA and the loan declared bad, when the distressed account department takes over.

Under the SARFAESI act (Securitisation and Reconstruction of Financial Assets and Enforcement of Security Interest Act, 2002) the bank first takes over the declared assets. Much of the assets have gone into complicated mortgages and multiple suits, thanks to the intentional oversights of the kind bank legal eagles. The assets as against the loans disbursed are now advertised for auction. However, the cost of assets far exceeds the market value, due to bloated loan mounts and further inflated interest accumulation. The auction attempt with expensive advertisements in leading newspapers have no takers.

Known characters, often politically well-connected then swoop down on the distressed sale department of banks to make their ‘take-it-or-leave-it’ offers, which could be merely a third or fourth of the value of the asset. Many communications and approvals later, such sale of asset take place at hefty discounts, as the banks close the transaction and a few officials getting richer.

I have not come across any news over action on any bank official on wilful acts of commission or omission in awarding loans to undeserving accounts. The bank managers tend to delay declaration of accounts as NPA, as it may arise internal queries from audit and affect individual promotion prospects. The stricter evaluation and disbursal of loans, tightening of screws on bad loans, commenced now by the government will do a great service to ordinary tax payers and India’s economy in general.

The NPAs of the public-sector banks could well run more than Rs.8.5 lakh crores at this of time of writing! (Pic. courtesy: Business Standard)

P.S. Not all bankers nor all borrowers are bad, but many politicians could well be!