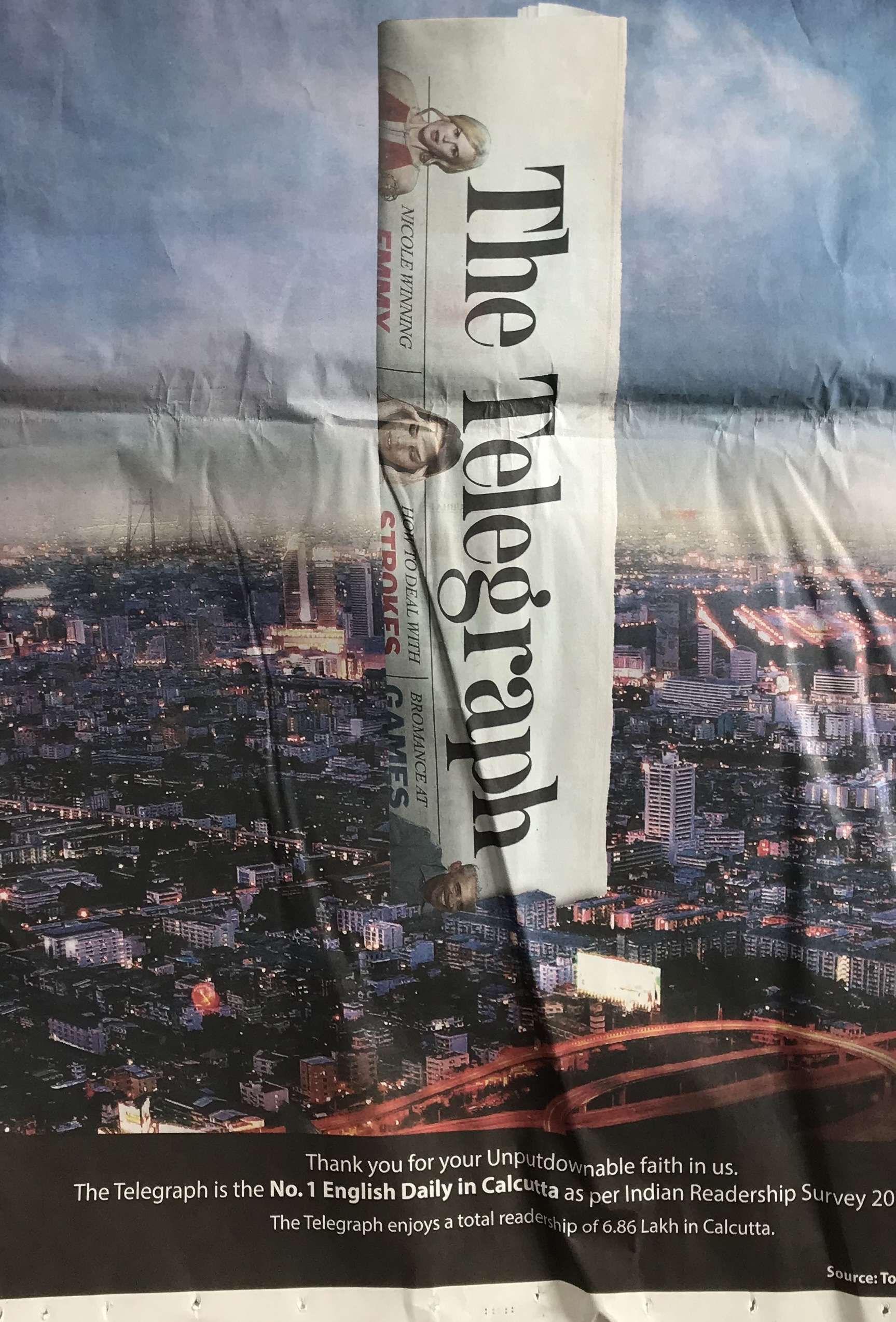 Three days ago, Times of India, Kolkata edition brought out a full-page ad in their newspaper, claiming that ‘they are #1 in Kolkata on the readership metric that matters most’ (Whatever that may mean! – see pic.)  Not to be outdone, The Telegraph Kolkata brought out a full-page ad claiming that they are the No.1 English Daily in Kolkata. TOI has claimed to be No.1 ‘ among the affluent in Mumbai.’  Well, this is not the first time that dailies are in the battle for supremacy. As soon either one of them releases the boisterous advertisement, the other follows countering the claim in military precision. Television channels too, follow the same battle-strategy!

Do these newspapers do justice to the contents they carry? They are into more style than substance and more advertisements occupy the space than news. Print versions are speedily being consigned to memory as news snippets have taken oven in mobile phones. The skill of exemplifying the virtues of English language in newspapers of olden era is all but forgotten. Newspapers were the source of knowledge and getting better acquainted with skill of reading and writing.

I fondly recall being persuaded to read aloud Editorial columns of Statesman, the premier English daily of yesteryears in my school days in the free period and we had one period free every day. A few Englishmen, who used to visit me in the recent past, never failed to pack a few issues of Statesman while returning home, stating that the Victorian style is still alive in India, as their kingdom slid to money powered tabloids, with listless screaming headlines.

Mamata Banerjee, the CM of West Bengal, in a recent public meeting chided one of the dailies, going to the extent of naming them for carrying huge misleading advertisements on its cover page, running into even into double pages and multiple pages, inducing sale of many properties in and around Kolkata, often by questionable realtors. English dailies these days, as a matter of routine, carry vernacular advertisements, much to the chagrin of many readers. They include escort services, massage parlors and fly-by-night gurus and astrologers. The publishers absolve their liability with a notification that the advertisers themselves are liable for the contents!

The news contents are either 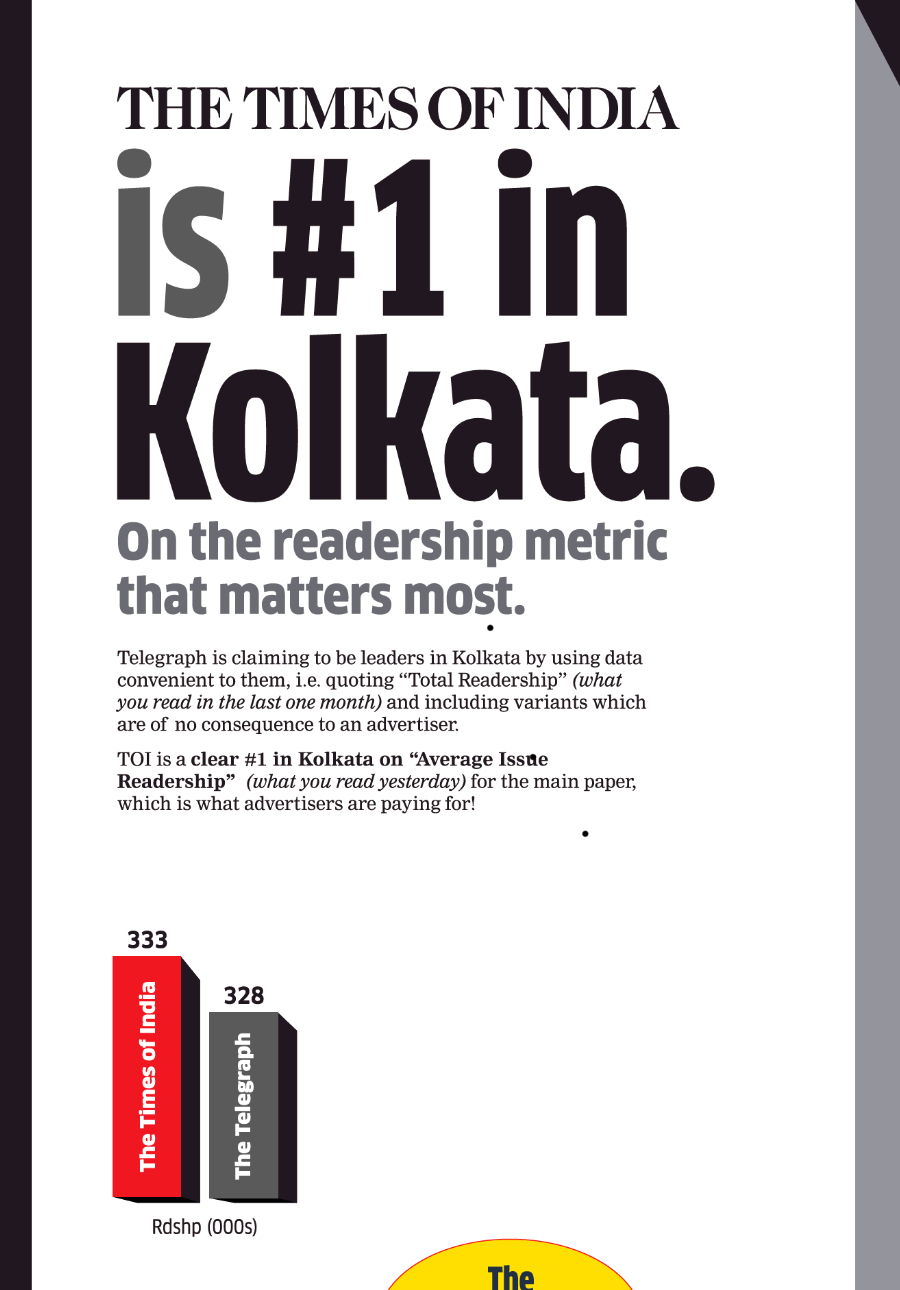 often biased or completely blacked out for the fear of reprisals of the government, which holds the key to release of advertisements, the revenue for survival. Spelling mistakes are glaring and many, grammar and punctuation seem to have been affected by the SMS bugs and editors seemingly do not exist at all. Newspapers have lost the sheen for letters as barely attired women vie for space in the pull-outs, often competing with the televisions on the obscenity ratings.

I miss The Statesman and the days of Late Cushrow Russi Irani, who dared the government and not yield an inch of ground, despite provocative attacks over the daily. Presently, I find ‘The Hindu,’ published from Chennai, a trace better, though their political news is often slanted. It may not be long before other dailies too go the Statesman way, into oblivion, as is happening the world over, unless an appropriate USP is quickly identified.

In the meanwhile, I urge both Times of India and The Telegraph to stop wasting revenue in carrying out listless ‘we are the greatest,’ advertisements. Neither of you are, at least for the moment! The readers, many like me may not be just interested.