40 Hours and fire still rages on! 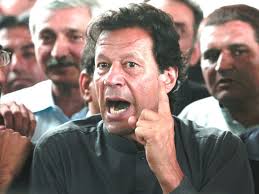 Just for the heck of it, I was searching if you were ever conferred a Knighthood so that I do not miss out the courtesy of addressing you appropriately as ‘Sir.’ You weren’t, but I was, and therefore consider it impolite to club you with commoners and will address you as Your Excellency, for being the Prime Minister of Pakistan.

Politics is not like swinging the bat and hitting sixers. It is a matter of restraint and diplomacy. Your elevation is not beyond suspect, which we from India consider the handiwork of your Army. You were handpicked by default, as Nawaz would have been exonerated if PML came back to power, which the army did not want. Try doing something that your military would detest and get a taste of what the worth of your chair would be, that’s if you are let to live!

You began well, first by admitting the bankruptcy of your country, but sneered at the US for withdrawing or downsizing their aid. You went with the begging bowl to China to pawn your country and soon after that Saudi to pawn your intellect. You auctioned the expensive cars but choose to commute by choppers. This is the stark reality of your myopia. The paradox of poverty of Pakistan is unmissable.

Every other day your snipers ambush our soldiers and send the bodies back, but only after mutilating them. Instead of auctioning the cars, auction off the military hardware and throw the generals to work in the farms and factories and see if your country prospers or not!

You cannot call for peace dialogues, amidst corpses of our soldiers. Your desperation is palpable, you want to prove that you are big and not small, like from our country! You call the Indian PM a small man in big seat, accusing him of lacking the vision to see the larger picture. I have viewed our leaders in open cavalcade many times until your country lost two wars with us and your people resorted to terrorism. Terrorists from Pakistan and your misguided cronies in India have changed our lives too, indulging in wanton killing and destruction in various parts of our country.

Yes, our PM has a humble background, and so are many of his predecessors. Please look at your country now from the big seat you occupy. I’ve had many occasions in foreign lands to come across many Pakistanis. All of them uniformly sulk in shame, when they compare Pakistan with Indian democracy; your fall and our growth. Your country is deficient because the cursed poverty is brought upon you by your generals and your own people, who have lost all faith in the leadership.

Your country, pardon my saying, is a classic example of degeneration because of terrorism and corruption. Everyone in your country is frustrated and is angry at India and its qualities. Yes, our PM has a right to be arrogant, because the elections are not army manipulated. Erring army men are court-martialed, democracy thrives but so does corruption, but not in any scale comparable to yours. We lead the world’s best corporates and are rightfully arrogant. Our women have led the country and are combat pilots in the army, they are housewives and corporate honchos, and therefore I am arrogant. We have every reason to be proud if you call that arrogant.

Change your attitude, as destiny has put us as inseparable neighbours. Spend less on army and more on development. Learn from our Prime Ministers, small they may be, but high in qualities. Don’t join the infamous league of rogue leaders like Duterte of Philippines too soon!