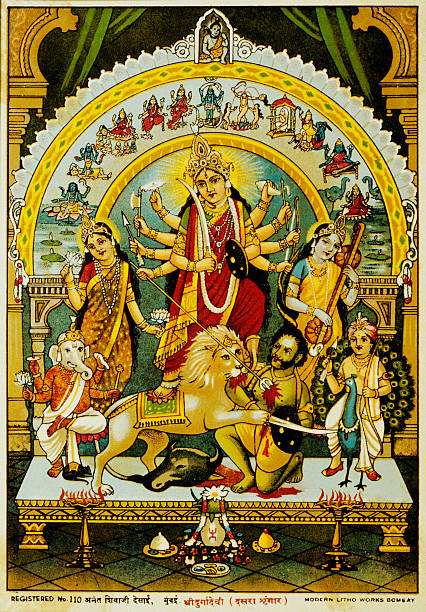 The light nip in the morning air and the sway of the blooming ‘khas’ flowers announced the arrival of the greatest auspicious celebration, the appearance of Goddess Durga to the homes in Bengal for a brief stay. Like the married girls, her visit is short, and she leaves to the eternal teary farewell of many. She adorns the image of a mother and as well a daughter.

While Ma Manasa arose as a symbol of defiance to the Brahmanical hierarchy, worshipped by the backwards, the early Durga was in the clutches of the priest-clan, and the celebrations were limited to the landlords.

The Sarbojanin or Universal worship that began in 1926 changed all that. It could have roots from Maharashtra when in 1893, Bal Gangadhar Tilak brought out the Ganesh Chaturthi celebrations to the common man as a means to unite the people against the then British government sometimes in the middle of 19th century. The rise of Hindu zamindars after the Nawab of Bengal broke ranks with the Mughals in 17 the Century and the subsequent victory of the English in the 1757 Battle of Plassey buoyed the landlords, who would flaunt their status with flamboyant indulgence during this period of ten days of pujas. Noteworthy Englishmen used to attend these functions, and a law was enacted banning their participation in the celebrations.

The Bengal Puja became the symbol of the swadeshi campaign “Nothing bideshi, everything swadeshi.” The later political changes and the abolishment of the zamindari system shrunk the size of pujas in the houses of Landlords, and the quiet transfer of power went into the hands of the public. The Pujas got transformed as Baroari when a few contributed, and later it assumed the universal ‘sarbojanin,’ character, thus opening goddess to all, organised and celebrated by the public.

Durga Puja today cannot be called a religious function anymore. It’s a carnival of sorts, the budget of the big clubs often running into crores of rupees. There is suddenly an economic boom of an additional few thousand crores into the circulation as every segment of business thrives. Durga herself seems to have settled with the change in a state, struggling for investments in industry and generation of employment, the ten days period is undoubtedly a shot in the arm.

A prominent minister from the present state government, a member of the minority community, is the president of one of the vital puja committee, which could describe how the celebration has transcended caste and creed resulting in the bloom of a rich culture of cross-fertilisation and understanding.

Durga Puja is the enduring hope of a section of the battling society. The goddess blessings reach one, and all in some form or other like many kind souls rush to bring the neglected old and sick by special buses to the pandals to give them some moments of enjoyment. Durga symbolises the destruction of evil, in the form of the buffalo demon Mahisasura, but I guess none cares about that much.

Regardless of an occasional cloudburst, storms or cyclone which has tried to dislodge the pujas in the past many times, the brave Bengali spirit soars high in the celebrations of Maa Durga, who will ceremoniously arrive in a couple of days.