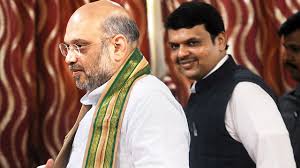 The political developments in Maharashtra is a twist not seen even in the movies and serials. The pre-poll partners BJP and Shiv Sena had a simple majority to form a government but could not form one over the thorny issue of sharing the Chief Minister’s post. The two Hindutva parties, BJP and Shiv Sena wedded for the last thirty years, separated in an angry note, Sena leaders taking an aggressive stand abusing and accusing BJP and its leaders.

President’s rule was imposed after the top three parties were unable to form the government within a defined timeframe.  Sena went berserk and sought support from their avowed opponents the National Congress Party and the Indian National Congress to form the government. Hectic parleys went on for about ten days as the three parties, Sena, NCP and Congress sent out many bytes, though not reaching out to the Governor in support of their claim for the formation of the government.

Even as Mumbai was deep asleep, the master strategists from BJP struck hard and deep, waking the Secretary to the Governor seeking a meeting early in the morning. The Governor hurriedly recommended the revocation of the President’s rule, which the President readily obliged. The Governor immediately invited Devendra Fadnavis of BJP to form the government with NCP its partner, the swearing-in done at 7.50 a.m.

Congress was suspecting Sharad Pawar of duplicity, but he revealed that it was his nephew, Ajit Pawar who acted independently and hiding his intentions from Sharad Pawar. Congress and the Sena were stunned beyond words and went into hiding.

Many issues arise from the recent Maharashtra developments. Sena was but a junior partner but concluded that they are deciders of Maharashtra’s political fate. They were proved wrong. Ever since the declaration of election results, Sena was confident that BJP could not form the government without their support. They started behaving like novices, and the chief negotiator of Sena, in particular, was pathetic, shutting the doors from BJP.

By reaching out to Congress and NCP, Sena has rattled their grass-root level members and may have committed political hara-kiri. The secular credentials of the Congress party too are in tatters after agreeing to align with the Sena, a far-right Hindutva outfit.

I would not know if it will augur well for BJP in the long run for aligning with Ajit Pawar’s faction of the NCP, riddled with many scams. While there was rabble-rousing in Matoshree, the Sena headquarters, at Akbar Road and NCP’s offices, there was studied silence in BJP quarters. Modi made a passing remark in Rajya Sabha, praising Sharad Pawar, who surprisingly had called on the PM. Nitin Gadkari went on the TV channels to claim that the opportunistic alliance of the Sena-NCP-Congress will not last eight months. These were mere diversionary tactics, even as the political Chanakya was making his deft moves stealthily.

There may be loud cries that disregarded morality, but where is the question of morality in politics at all? ‘Jo jeeta wohi Sikander,” He who wins is the king! I expect a deluge from the Sena and also am sure that the Nov 30 vote of confidence will be breezy for Fadnavis!

The question which again will raise is on the Governor’s actions, but that can wait. What about the sanctity of the pre-poll alliances and promises? Do they really matter?